Tags: another girl, review, solblomma
Posted in SoLBLoMMa | No Comments » 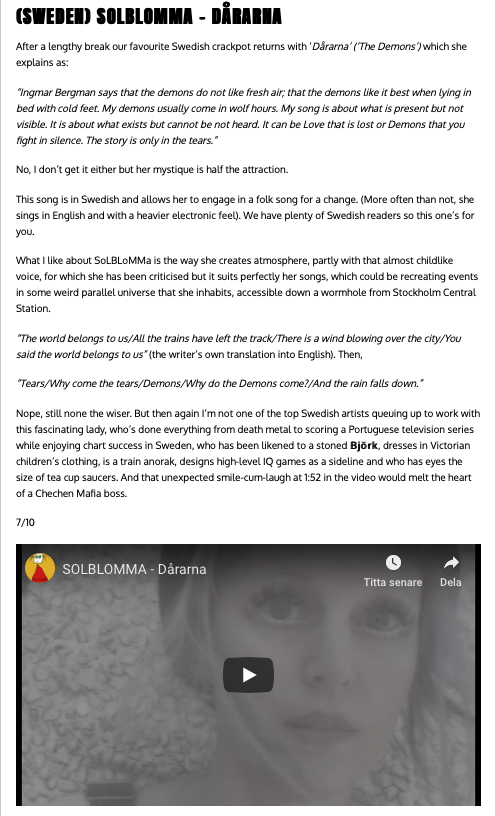 New Music: Solblomma – She Said Nothing

Off all the fascinating artists I met at Gefle Gas, the festival I reviewed a few weeks back, SoLBloMMa (her stylisation) (or ‘Sunflower’ in English, it’s her name) stuck in my mind at least partly because she’s unique, a free artistic spirit. So I’ve researched her and have been on the lookout for anything new from her. While she has some ‘elements’ of other performers in her persona I have never seen or heard anyone else with whom she can directly be compared. She’s about as far removed from generic pop as you can get, and I’m all for it.

She’s multi-skilled, making her own videos to promote her electronic alt-pop work (many of them involve the ‘faceover’ you see here). Having once been signed to EMI she now runs her own label (Blomkraft) and even multi-tasks as a puppet master and as a clown (not a creepy one I might add, more as a genuine children’s entertainer). She designs online IQ games and she even rivals Pete Waterman as a railway geek; you can’t get quirkier than that.

Vocally, while I again stress her uniqueness, you can identify at least bits of Cyndi Lauper, Clare Grogan (Altered Images), and Polly Scattergood in her voice, while visually she often has the look of (a much gentler) Alex from A Clockwork Orange. She’s a self-creation of contradictions.

While I’m uneasy about using other peoples’ reviews, this truncated analysis from Electronic Magazine is priceless:

“Think Depeche Mode booted out the back of a Transit van on a cold, dark winter’s night, think Lykke Li taken by the dark side, think Kylie with Winehouse’s problems, think Björk dating Goldie… then we begin to see something remotely resembling Solblomma. With eyes you could stand teacups on, she’s got something of the Cheryl Cole about her… only with a Katie Price makeover… at night… with doll’s clothes.

I rest my case.

The video here for She Said Nothing was inspired by a recent business trip to the western USA which took in Las Vegas, the sort of place she’d be very much at home in, as a philosophy graduate, with its sharp contrasts between rich and poor, big business and ‘the ordinary people’, professional entertainers and street bums, cops and bad guys (think the original CSI) and, ultimately, winners and losers.

While the song is set in a wintry Amsterdam, it could equally play out in loser’s Sin City as her departing lover struggles to find the words to explain how he’s lost his love for her. (Probably at the tables, along with his credit). As Win Butler sings, when love is gone, where does it go?

The only problem I have is the lyrics, or at least some of them. It has some great lines, such as “you and me in the land of Shakespeare, breathing love in my ear; our trip, my dear, has just begun” and “I’ve lost my love, he said/hmmm, she said nothing/a bottle of stone crashed her heart”. But other stanzas leave me floundering.  Most of the Scandinavian/Nordic world speaks better English than we does but whether it’s Iceland, Norway or Sweden I’ve lost count of the number of times I’ve said in these pages that something doesn’t make sense; that the meaning has been ‘lost in translation’. Perhaps it’s time for someone to devise a Scandinavian-English songbook dictionary.

Solblomma Hedin has taken on several different personas over the years. She’s busked her way around Europe, dabbled in Death Metal with one of many bands, The Strawberry Army, had chart success with the songs Girl at the Station and Sandman, worked with leading jazz pianists and saxophonists, scored a Portuguese TV series, and her first album (1997) was described as ‘epic experimental trip hop”, in which she portrayed a dozen different characters herself, prompting one critic to liken her to a stoned Björk. Oh, and she’s also adept at writing and adapting traditional Swedish folk songs.

Until a few years ago she wrote and performed as ‘KiN’ (‘Sun’ in the Mayan language), releasing two albums and four singles with a similar style but latterly as Solblomma she’s been going in two directions, one of them even more deeply into a sort of fantasy world with her current band The Sheep Army (which I’m not completely convinced by, as I said in the festival review). The other direction, under new management guidance with Comedia, is deeper into the electronic world where there are more possibilities for someone of her creative mindset, as this song and video suggest, and which at least falls within a ‘traditional’ framework.

It’s a necessary move in my opinion. The Nordic countries in general and Sweden, in particular, are home to The Law of Jante, which is too complex to go into detail about here, but which effectively describes a condescending attitude towards individuality and success; a mentality that de-emphasises individual effort and places all weight on the collective, while discouraging those who stand out as achievers. If you watch ‘The Bridge’ you can see it in the character of Saga Norén.

For that reason alone perhaps the time is right for Solblomma to seek her fortune elsewhere, where such laws have no reach. Not so much Leaving Las Vegas as arriving there.